A few notes on some recent work…

I was recently contacted by Sabrina from Lady Jayne’s Cakes who got in touch via recommendation from Russell Hall.

Sabrina was looking for someone to help with updates to her website. After checking her site out, it became clear that the website could do with a little love, rather than just updates.

Below is a screenshot of the previous version 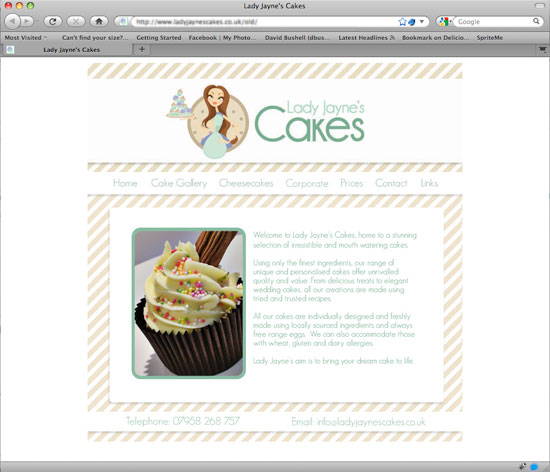 Whilst pleasing on the eye, unforunatley the site was made up purely of images with little or no alt text. Obviously this was a) not going to do any favours in the search engines. b) not accessible for the visually impaired (as the text would not clearly enlarge when ‘zoomed’ nor would any of it be picked up by screenreaders).

The site was built using dreamweaver templates which meant that her previous designer/developer could update the gallery fairly easily – however this kept the need to request and wait for updates.

No ‘roll-over‘ states on hover of the menu/links to aid the user.

Modern screen widths mean that the site was not making the best use of the screen and may this may appear very small on many computers.

After discussing with Sabrina – I re-coded the website based on the original design with a few changes; - see below 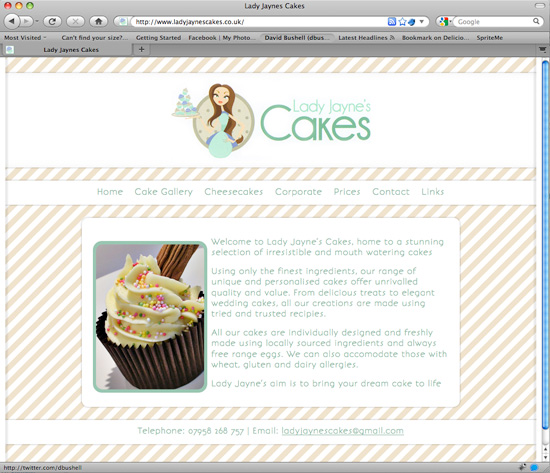 Increased the sites width to make better use of the screen.

Made use of CSS3 – box-shadow, text-shadow, border-radius -  to dramatically cut down the number of images needed within the design (and man hours in coding).

Made use of @font-face so that the site could maintain its previous feel but use ‘real‘ text on the pages and navigation making the content accessible for all users and of course the search engines.

Installed the ‘fancy-box‘ gallery plugin to add a little jQuery magic to the Cake Gallery.

The website also now runs on WordPress meaning Sabrina can easily update/create pages herself with complete control and most importantly maintain and update her cake gallery.

At the time this work was carried out WordPress 3.0 had just been released and was used to build the the site. I was massively impressed with the new menu features which gives the user complete control of the structure of the navigation menu(s) without the need for any plug-ins.

The site was re-coded and integrated to WordPress in a day. I’m really please with the results and so is Sabrina – so win, win all round.

Feel free to go and check out Lady Jayne’s Cakes for yourself – I’m yet to sample any, but they certainly look good!