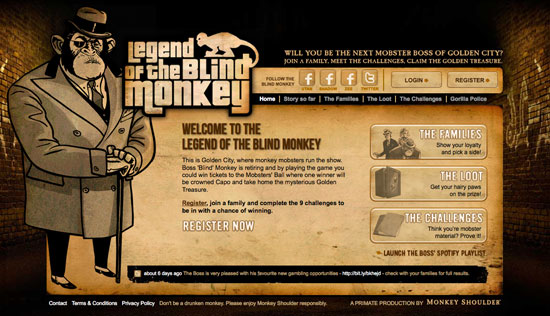 As the story goes Boss Monkey (Golden City’s Crime Boss) is due to retire – your job is to complete the challenges and work your way up the Monkey ranks to take control of the three crime families by being crowned Capo of all Capi.

There are 9 Challenges to complete & you must find the answers to by reading up on the backstory, keeping up-to date with The Howler (Golden City’s newspaper) and following the games various twitter and facebook accounts.

I’ve been following the stories posted in The Howler as well as the games twitter and facebook accounts and have been really enjoying following along!

There’s just 4 weeks left to join the game so go register now and maybe I’ll see you at the Mobsters Ball!

One Response to “Legend of the Blind Monkey”